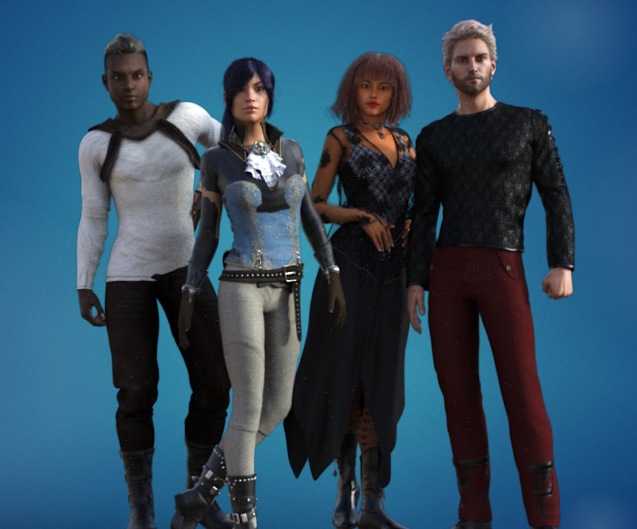 In the Earth year, 1992, 141 individuals from all corners of the globe came together through mysterious means and crossed through to Telamier.  Unable to return to their home, they settled and gave rise to the Human region of Earthenia.  Small in numbers, Humans are incredibly tenacious and devoted to their species.  Inventive, bold and sometimes stubborn, they are quick to make a name for themselves among the other species.

Native to Celhara in the Jysah system, Celehi are the dominant species of Telamier.  Their dominance stems from their conquering of the Vairdec in the first war for the planet, a victory gained in large part to the alliances they held with other species.  Predominantly peaceful, Celehi express themselves with poise and fairness, though at times are viewed as a touch self-righteous.  Their most famous characteristic is their iridescent skin that ripples various colors depending on mood.  Pale blue is neutral, purple equals embarrassment or shyness, green is flattery or amusement, yellow is anxiety or fear, orange to red indicates levels of anger and white shows extreme fear. 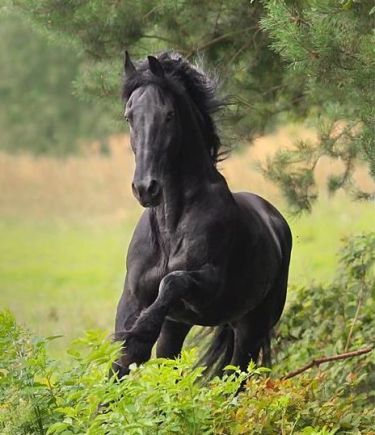 Often the most misunderstood sentient species of Telamier, Candonians are a proud race, both wise and powerful, able to speak any language they are taught.  Their incredible resemblance to horses provided them with a connection to Humans from the beginning.  Though most Candonians prefer to live in their native wild lands of Earthenia, some still work alongside Humans.  As a species, they are considered the most primitive but are in fact incredibly resourceful – able to irrigate lands, cultivate crops and alter terrain for shelter and other conveniences.  Having never developed any real technologies, the Candonians’ intelligent minds often focus on learning great wisdom and truths, which they speak to other species willing to listen. 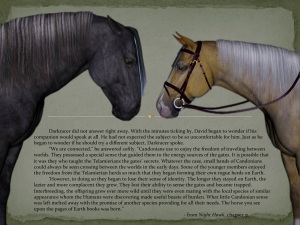 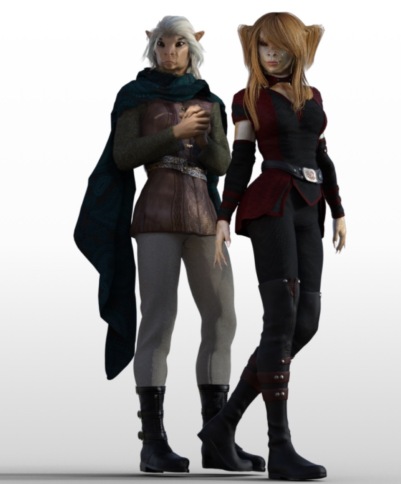 Coming from the planet of Hardiban, which lies between Celhara and Telamier, Teshians are one of the oldest allies to the Celehi.  Many are spiritually bent, and the species often expresses a suave, sophisticated air.  However, they are fierce warriors and their knowledge of this fact can place them at odds with individuals.

Native to Telamier’s neighboring planet of Ayzat, Oxyrans are one of the most common species on Telamier.  Their stature is smaller than most of the other species – an attribute to the colder climate of Ayzat – and this often causes them to express themselves as tough and aggressive.  With dense muscle fibers, they can easily match larger species in strength.  Many times Oxyrans act rashly without careful thought, sometimes getting them into tense situations with other species.

Though some consider them primitive, Manogonites are amazingly resourceful and have a strong culture balanced between natural living and technology.  As the only flying sentient beings in the Chorbix Super System, they commonly exert a tough, domineering behavior toward others.  This behavior is also contributed to their overly inflated sense of discrimination, believing their unique form and smaller size leaves other species thinking less of them.  While some prejudice does exist in areas, most other species are wary of Manogonites simply due to their feisty personalities.

Often considered the most feared species of Telamier, Faxons are indeed powerful and aggressive.  Able to reach heights of eight feet and weighing in at over 600 pounds, Faxons know they have the strength to push others around.  Originally from Borfax, they do not hold any regional claim to Telamier and frequent it only for work and trade.